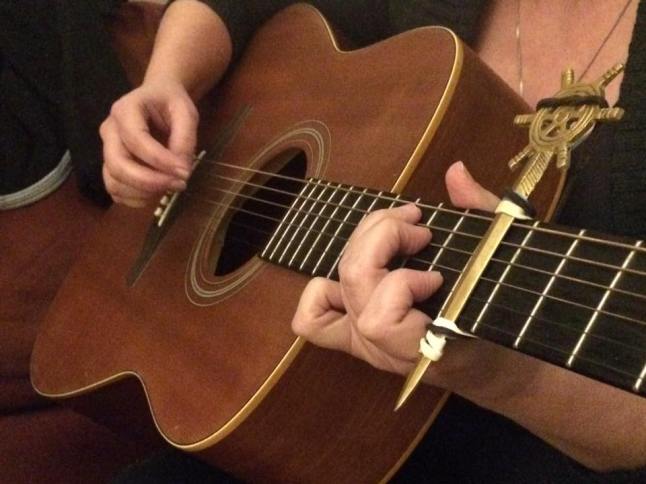 “One good thing about music, when it hits you feel no pain” – Bob Marley, “Trenchtown Rock”

I found a t-shirt at Value Village with that quotation on it.  I snatched it off the rack quicker than you could say, “Ya, Mon”! So many things have been said about music by some of the greatest artists in history but this statement by Bob, written into the lyrics of one of his songs, nails it for me. As the Man in Black says in The Princess Bride, “Life is pain, highness. Anyone who says differently is selling something.”But music can knock the hell out of pain. Music is not to be trifled with. Music can take that savage beast and body slam it.

Last Saturday evening I had the pleasure of attending a house concert in the cozy confines of my friends’ home. I also had the privilege of playing three songs that night, though my jangly sloppiness seemed almost sacrilegious compared to the esoteric, beautiful and heartbreaking offerings of the other performers – songs by Leonard Cohen, the Wailin’ Jennys, Ryan Adams, Alison Krauss, Ricky Nelson – It was a fine time. And music did its work on me again. I came there tired, worn out from a headache I had battled all day, and not very enthused about my part in the evening. But quite literally within the first few moments of the first song of the night, the music hit me and I felt so good. The pain dissipated, the weariness lifted, and it felt good to be alive again.

I know there are scientific reasons for this; releasing endorphins or endolphins or some such thing. Whatever. All I know is that music has done this for me time and time again. When I am at my lowest, when I’m feeling depressed, or when things just are not that great, I’ll be driving in my car, a song I love will come on the radio and I’ll start singing, maybe even shimmying a bit in my seat (ever done the driver’s seat boogie before?) and my day is transformed into something else. It is magic, science be damned. It is like being given some elixir from a benevolent alchemist; you drink it down and – Voila! You are made new again.

I was reminded of this on Saturday night in that warm and welcoming living room, full of people there to enjoy music and share music. I was reminded about the role artists play in the lives of others. By willingly giving their gifts, they bring healing; they sow joy; they take your barely livable life and make it exceptional and make you so grateful to be alive. Talk about alchemy! It made me very thankful to have so many benevolent alchemists in my life, either those known to me or those who I know only by their art.

These thoughts made me realize the part that I can play in people’s lives. It renewed my thankfulness for my own gifts and talents. So often I disparage them and feel that they are inadequate. It seems a common trait of artists to think whatever they offer is not quite up to par, not as good as the next person, and therefore unworthy to be shared. But the truth is that creating something and offering it to others for their enjoyment or to challenge or to inspire, is a sacred thing. As a sacred thing, what you offer as an artist, crafted distinctly from who you are, is never unworthy. It is magic. And the world always needs more magic.