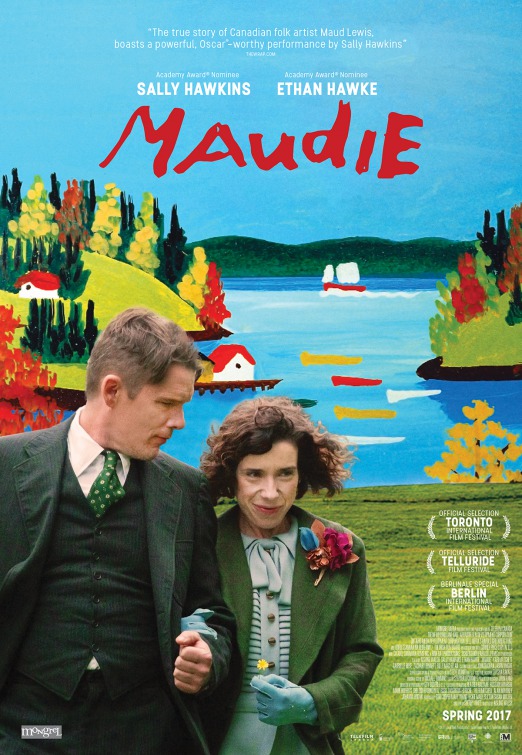 Since I began my Creating Dangerously project for 2017 (a blog post every day this year centered on creativity, arts and artists) I have noticed that I am much more in tune to the possibility of discovering something wonderful almost every day. My senses have become much more heightened where creativity is concerned. So it was that when I went to see a movie this past weekend at Ottawa’s Bytowne Theatre, I saw a poster for an upcoming movie, Maudie. At first, my daughter and I picked up on the fact that it was staring Hawkins and Hawke (whatarethechances?). But I also noticed the painted background right away. “Hold on,” I thought, “Is this a movie about an artist? Who is ‘Maudie’ anyway? Hmmm…”

I received an answer while watching the trailers played before our film. Maudie is a movie about Canadian folk artist Maud Lewis (1903-1970) born, raised and lived all her life in Nova Scotia. I didn’t get all that from the movie trailer, of course. I got that from doing research on an artist I had never heard of before. And when I started digging, I couldn’t believe that I had never heard of her. I had “discovered” another gem.

Maud Lewis lived all of her life in poverty. She was afflicted with juvenile rheumatoid arthritis. Yet despite this, with the encouragement of her fish peddler husband, Everett, she churned out hundreds of paintings, intended to make a few dollars to add to the household income. She mostly painted on a very small format, 8 by 10 inch boards (due to her limited movement because of arthritis), with oil paints straight from the tube, no mixing. In the 1950’s she began to sell her paintings from the front yard of her home. Her asking price? Two to three dollars apiece. It wasn’t until just a few years before her death that she raised the price to seven to ten dollars instead. Today, one of her paintings sold at auction for over $22,000.

The Lewis home became an artwork itself as Maudie would paint just about any surface available. In fact, years after her death, when the house was getting run down, a group of people made it possible for the place to be preserved. More so, they were able to get the home housed for good inside the Art Gallery of Nova Scotia. Below are photos of the exterior and interior of that home, a one-room dwelling with a loft bedroom:

There are times the art world looks down its nose on “folk art” as things can tend toward the kitschy and overly, almost patronizingly, quaint. But Maud Lewis’ work is undeniably profound, bright, charming, fun and sums up a view of the Maritime lifestyle of her times. She painted her world and she painted her personality. One documentary on her life is subtitled “a World Without Shadows”; indeed, Lewis’ paintings are the kind of thing that remove any darkness from the viewer’s mind and replace it with sweet sunshine. You can’t help but feel a little lighter after looking at her joyful artworks.

I’ve included here just a few examples of her work. I found them so enjoyable and so inhabitable, that is, places where I wanted to be! Right now! Thank you, Maudie. 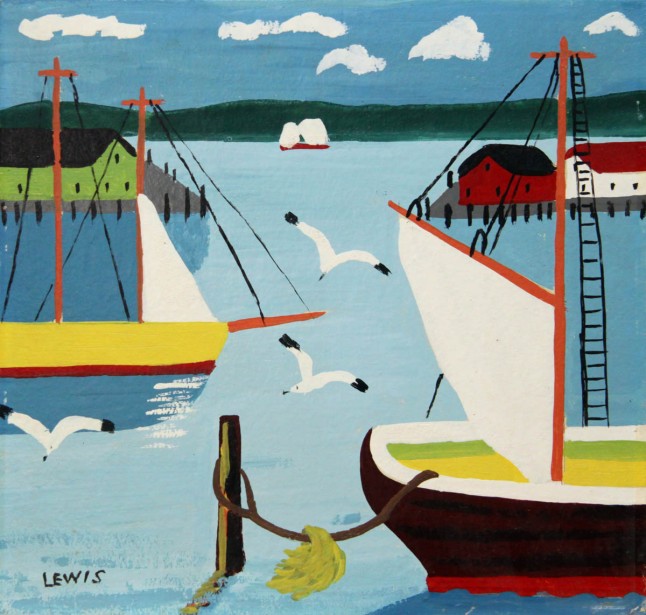 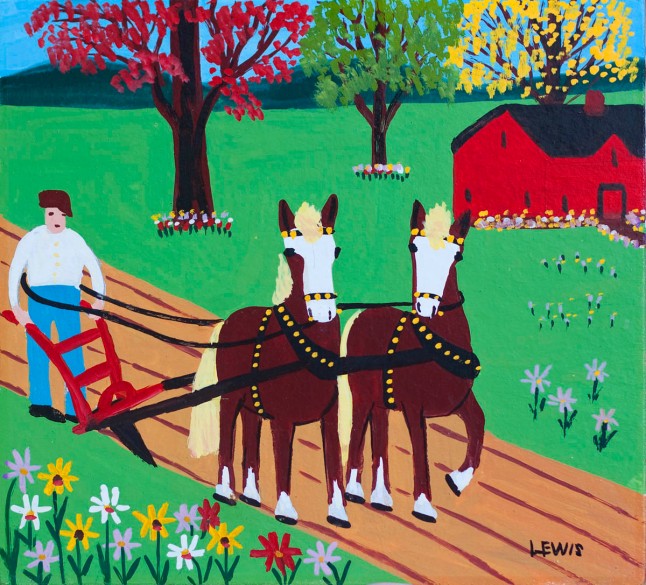 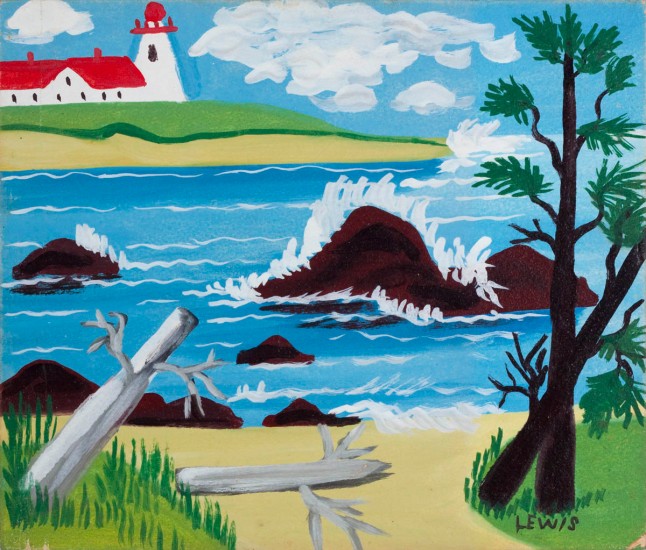 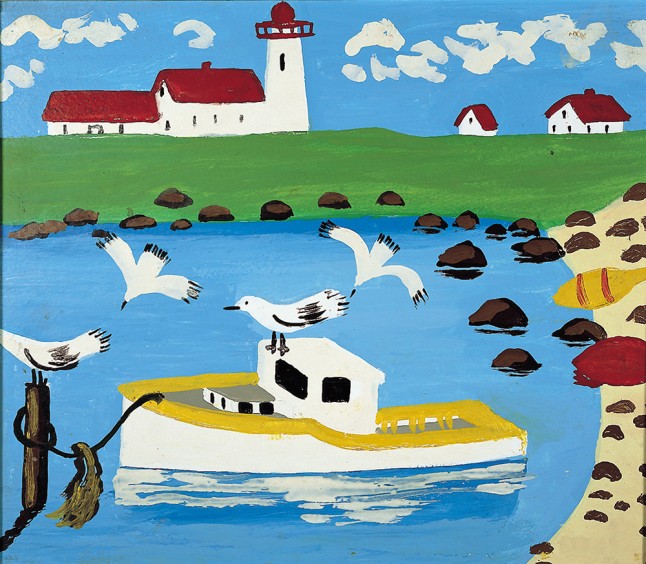 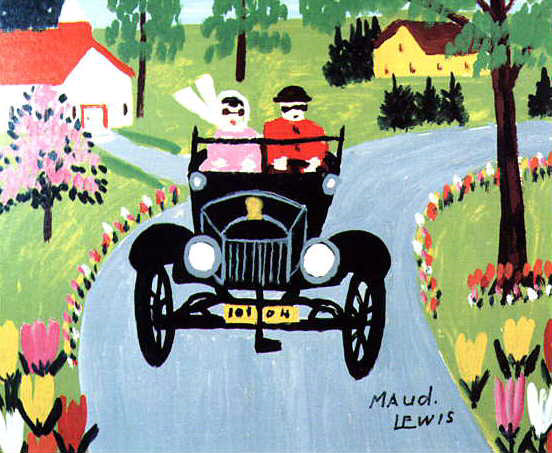 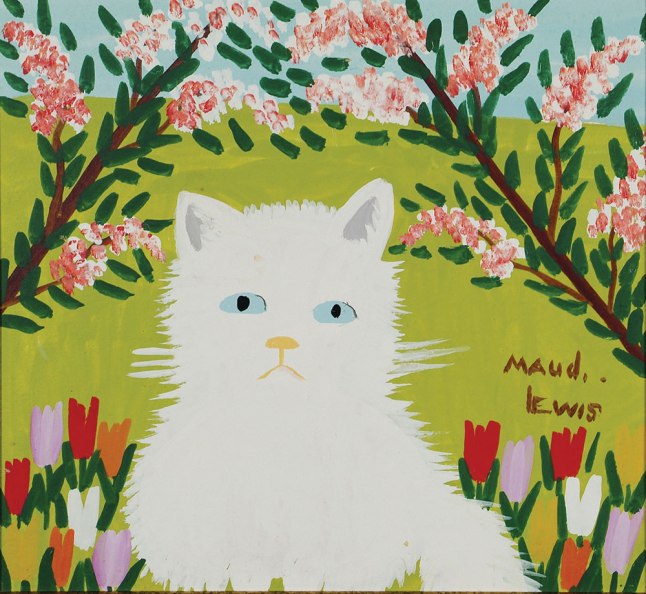