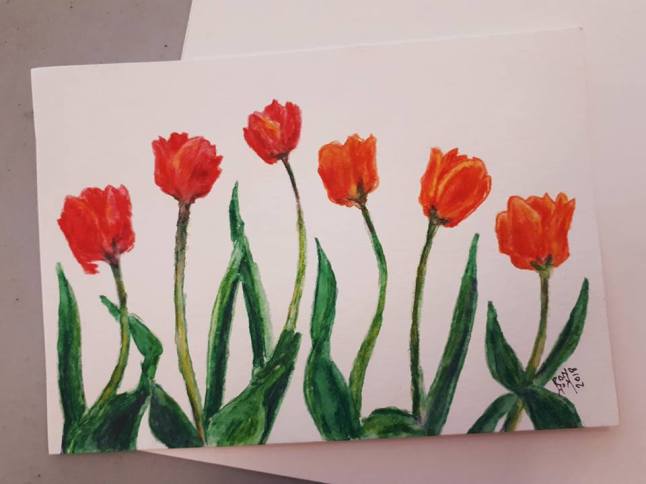 It’s not much. Six tulips on a small piece of watercolor paper. The paper is only about 5″ by 7″ in size. It took me about an hour to make. In reality, just another small, simple bit of art that doesn’t break new ground or set the art world on its ear. Quite literally thousands of works like this are done daily, if not hourly, around the world. Some are quite professional and sharp, others amateur but alive with life, others primitive but heartfelt, others sloppy and unsophisticated. Each are drops in the vast bucket of human creativity.

On the surface, unexceptional, everyday, commonplace.

I did this small painting on Valentine’s Day, 2018. My wife and I have been married over 27 years so we don’t make a huge deal of the Hallmark instituted “holiday”. Yet it is impossible not to think about each other on the day, to want to express, in some way, the love we have for each other. She left me a cute little baggie of chocolates with a note on the kitchen table that morning. Nothing big, nothing showy, yet conveying everything important – Someone loves me enough to think about me when we’re apart and, more so, to put something together just for me.

I took an hour or so of my day that day to make the above painting. As an artwork, nothing special; as an expression of my heart to my wife, I would hope that it is much more than just another simple bit of creativity. It reminded me of the fact we so often overlook when seeing something someone has made with their own hands like this: There is a story behind every single bit of art, be it a masterpiece or be it a clumsily crafted work.

As I exist and take in my world, seeing a multitude of faces each day, swept along in the tide of humanity in my spot on the globe, I often consider how I am just a little bit more than nothing amidst all these people, all these stories, all these gifts, all these lives. Yet what can seem almost nothing when put against the sheer numbers of humanity, when the truth about each face is revealed, it is a powerful thing to realize that each person contains all that is truly important. Each of us, in a sense, is a self-contained universe. Each of us created to be unique, to be only ourselves, to be that singular person that has never existed before and will never exist again after we are gone.

And we will be gone. Each of us. But does that make who we are and what we do insignificant?

Was my little painting insignificant? I don’t think so. Really, how could it be? Motivated by another, meant as a small message of care for someone else – Nothing like that means nothing.

2 thoughts on “A Nothing Means More Than Nothing”