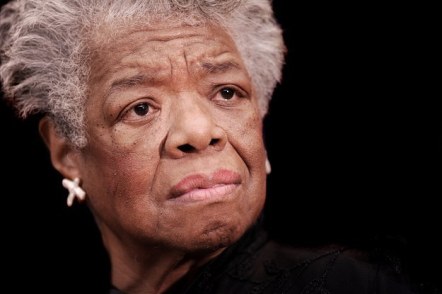 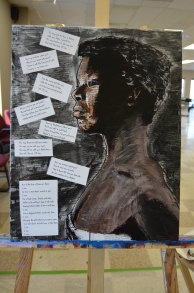 At the beginning of the year I set two goals for myself:

First, to use the avenue of this blog to post daily creativity, either from myself or from other artists, in order to make 2017, for me, a year of “creating dangerously”, that is, a year of making art public, open, vulnerable, accessible, engaged with the world; in other words, art where and what it is supposed to be. I wanted to take in a wide spectrum of artists and creative expression so this blog touches on visual art, music, movies, writing, oratory, poetry, and on and on…

Second, I challenged myself to get back into painting and set the goal of creating at least one new piece per month. I haven’t worked on any “serious” painting since college (back when dinosaurs roamed the earth). I decided to use the theme of artists who inspire me, who created or create “dangerously”, and honor them in my paintings. The first painting was actually completed at the tail end of 2016 but it was, fittingly, of Joe Strummer. If you know anything about me, you know I have a thing for Joe. To me, he’s top of the heap when it comes to creative types I am inspired by. Here is that first painting again: 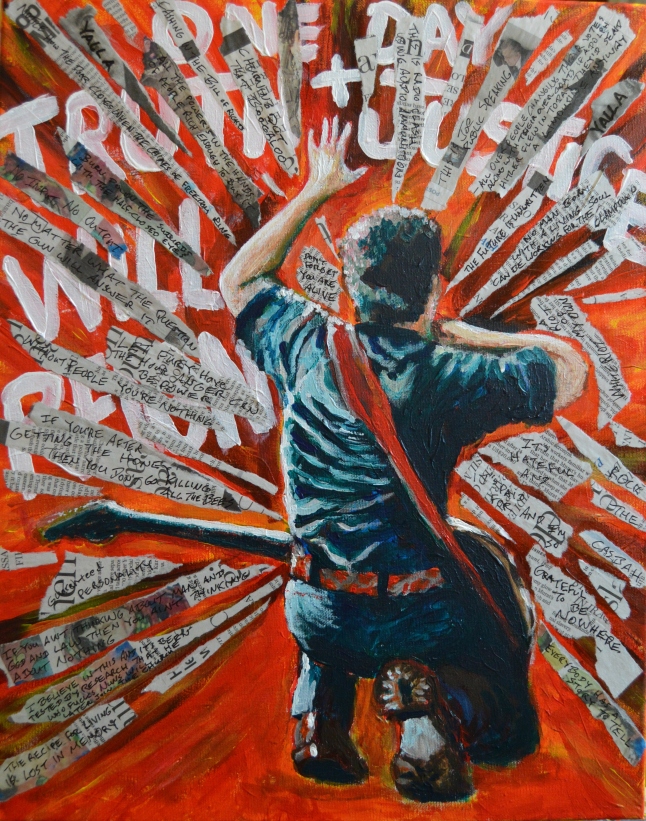 My second painting was just completed a few days ago. It is meant to honor Maya Angelou (1928-2014), the glorious author, poet, dancer, speaker and all-around phenomenal woman.  It seemed fitting to finish this in February, acknowledged as Black History Month. Here is a closer view of “Maya Rising”: 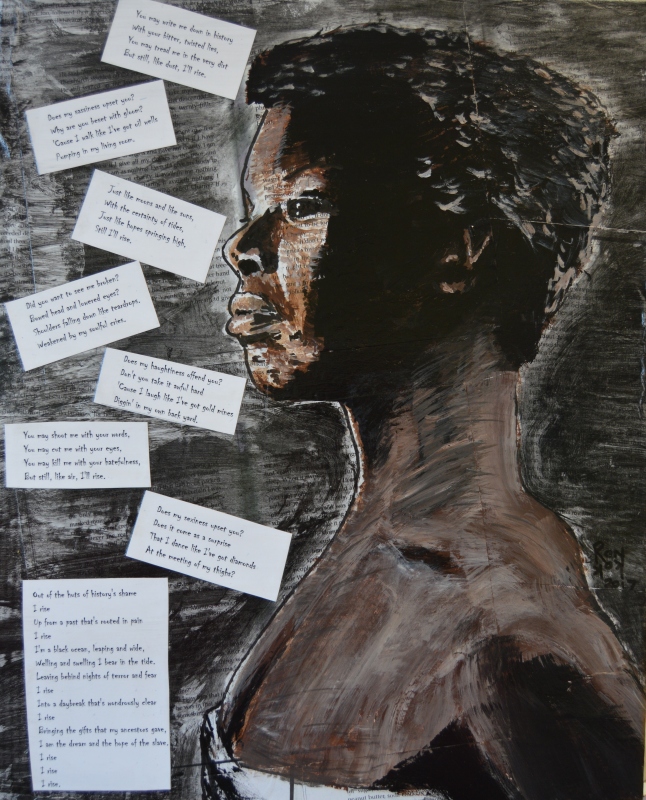 Unfortunately, I didn’t take photos of the process of creating this work. I wish I had. But I do want to describe some things that I planned and things I did not.

First, I took my 16″by 20″ canvas (each painting in this series will be that size) and affixed photocopied pages from “I Know Why the Caged Bird Sings”, the first and most celebrated memoir of Angelou’s career. My goal was to make her words the “backdrop” to her portrait, with the text coming through as shading and detail. She often spoke of writing as her greatest passion and, certainly, she is known best through her prose and poetry. I let the pages wrap around the canvas. I didn’t have any plan for laying the pages out, I just did it and hoped for the best.

Second, I looked for an appropriate photo of Maya to work from. I ended up visiting the Facebook page dedicated to her. There we a lot of great images but I was struck by one in particular. Most photos of her are sweet and beautiful, that big smile figuring prominently, truly conveying the joyful and intelligent person that she was. But this photo had something different: Defiance, power, pride. It was so different from the others that I was immediately drawn to it and thought, “That’s the one.” Here it is:

Thirdly, I worked on ideas of adding one of Maya’s poems to the piece. At first I thought of her poem “Phenomenal Woman” but it wasn’t resonating with me as I looked at the photograph. Then it hit me: “Still I Rise” would be much more apropos to this particular portrait. That poem is defiant, powerful, proud – It was a big “Aha!” moment for me. As it may be difficult for you to read it in the photo I posted of the painting, here is the poem in it’s entirety:

Still I Rise
You may write me down in history
With your bitter, twisted lies,
You may trod me in the very dirt
But still, like dust, I’ll rise.
Does my sassiness upset you?
Why are you beset with gloom?
’Cause I walk like I’ve got oil wells
Pumping in my living room.
Just like moons and like suns,
With the certainty of tides,
Just like hopes springing high,
Still I’ll rise.
Did you want to see me broken?
Bowed head and lowered eyes?
Shoulders falling down like teardrops,
Weakened by my soulful cries?
Does my haughtiness offend you?
Don’t you take it awful hard
’Cause I laugh like I’ve got gold mines
Diggin’ in my own backyard.
You may shoot me with your words,
You may cut me with your eyes,
You may kill me with your hatefulness,
But still, like air, I’ll rise.
Does my sexiness upset you?
Does it come as a surprise
That I dance like I’ve got diamonds
At the meeting of my thighs?
Out of the huts of history’s shame
I rise
Up from a past that’s rooted in pain
I rise
I’m a black ocean, leaping and wide,
Welling and swelling I bear in the tide.
Leaving behind nights of terror and fear
I rise
Into a daybreak that’s wondrously clear
I rise
Bringing the gifts that my ancestors gave,
I am the dream and the hope of the slave.
I rise
I rise
I rise.

I decided instead of writing the poem myself on the canvas, to print it up and divide up the “stanzas”, making them “rise”, in a way, along the left side of the piece. I was originally going to layer a few of these on top of each other but is was turning out too busy and too distracting.

Fourthly, I sketched out where I wanted Maya to be on the canvas, giving myself enough room for the pieces of her poem but also getting here entire profile in the image. Then I dove in with an art marker. That was a scary moment where I didn’t want to screw anything up! I drew out the shape of her face and head, neck, chest, etc. with the pen. I thought the black of the marker would help bring out the contrast of the photograph. I chose to “remove” the jewelry she was wearing in the original photograph. I thought the effect of seeing her neck, shoulders and chest unadorned was more stark and direct, befitting the poem.

Fifth, I took some watered down black paint and a sponge and darkened the background around the portrait. I wanted it dark but not too dark, so you could still see some of her words coming through. Then I added paint to the portrait I had drawn with pencil and marker. I only used three colors – brown, white and black, with a bit of mixing and adding water to give different shades. I kept a “sketchy” quality to it as it seemed to fit with the whole look of the painting.

Sixth, I glued on the bits of poem. After it dried, I used three layers of varnish to seal the artwork well.

As I was working on it, and after it was done, a couple of things surprised me. First, the lines of the photocopied paper, one following her neck line, another following the line of her chin – I did not plan that at all. In fact, I didn’t notice it until everything was done. I was also able to keep the white of the paper as the color of the bit of dress you can see at her breast, helping to create the strong contrasts. Secondly, the fact that in this photo she is facing left – her determined gaze going that way – but all her words run left-to-right, so as you read the poem, you come to the end of a line and confront her portrait each time you do so. It adds extra punch to this punch-filled poem. I’d like to take credit for figuring all this out beforehand but that would be a big fib.

In the end, I believe Maya and her words really did inspire me, both consciously and subconsciously. And, really, isn’t that what a great artist is able to accomplish in their art?

Thanks, Maya. God bless. We miss you.