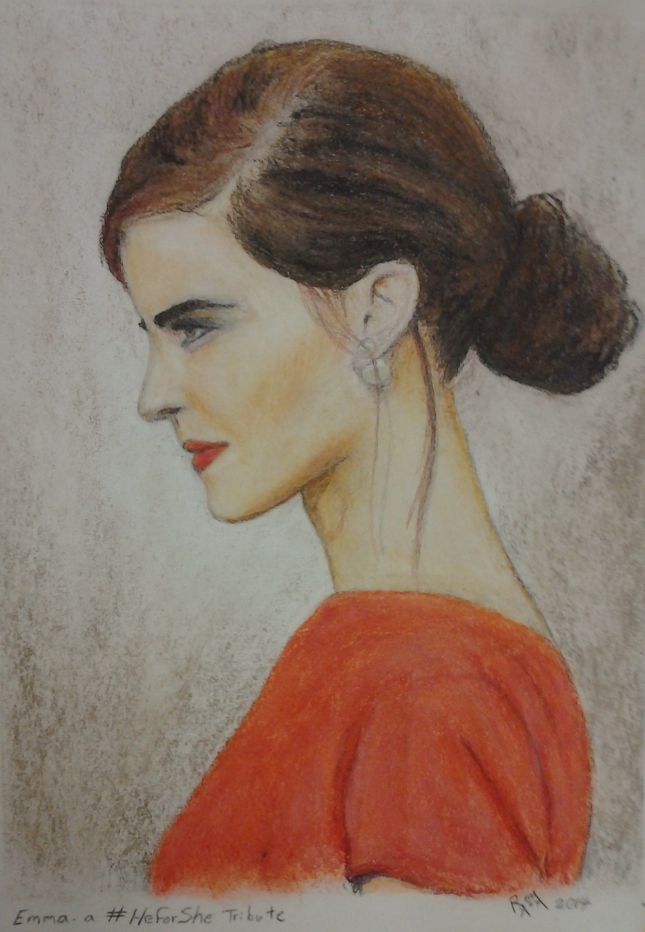 By Ronald Kok
Oil pastels and pencil crayons on paper

The “He For She” campaign has many men calling themselves “feminists”. I hesitate to label myself that way as there is a lot of baggage attached to the term. I understand that there is a re-branding idea going on here; a movement to label feminism with a fresh perspective, one in which men, too, can feel a part. Nevertheless, I likely won’t be wearing an “I Am a Feminist” t-shirt any time soon. However, I would hope that the ideas behind that sentiment will one day define me. In other words, if I’m going to wear the “Feminist” tag I’d rather wear it on my metaphorical sleeve than on something bought off of e-Bay. Because, ultimately, it won’t be the slogan or the Facebook post or the text or tweet in support of women that brings about equality. These things are often superficial and transitory. Labels loose their stickiness and fall off far too easily. What is needed is a change from the inside out. What is needed is taking our shared humanity and placing it firmly in the center of how we view one another.

We live in an age of dehumanization. Our digital world brings us tantalizingly close to the rich and famous, where we can get to know them like never before. Yet it seems that kind of intimacy breeds great contempt. Consider the case of the hacked photos of Jennifer Lawrence that were made public. To some, the simple fact of her celebrity made her fair game; the price she has to pay for being one of the elite few beautiful millionaires who make a living in the public eye. Frankly, that kind of bullshit was just another sad, sorry “blame the victim” perspective. The hacked photos were a sex crime. Let’s make that plain. And the perpetrators should be charged accordingly.

The act of publishing the hacked photos was an act of dehumanization. Able to access private information, the people behind this creepy caper chose to target someone they don’t view as fully human. She’s a celebrity, after all. Not one of us. I’m willing to bet those same hackers, unless completely depraved, would never publish naked photos of their sisters, their mothers, and, even, their close friends who happen to be women. The humanity in those cases is too strong, too close, too personal. But Jennifer Lawrence, a Goddess of the Big Screen, though accessible through so many media channels, was not viewed in the same light. For some reason, she was seen as less than human, less than real, and, therefore, an easy target.

What does this have to do with the pursuit of gender equality? I’ve come to realize that the women in my life, past and present, who I have come to love and respect, are fully human in my mind. They are women, yes, but more so they are fellow human beings who have enriched my life. To debase them, degrade them, make them objects of lust or violence, is abhorrent to me. But my world presents me with so many other women who I do not know. In some cases, they are women like Jennifer Lawrence: supremely talented, very public figures. In other cases, they are women who are presented as commodities, window dressing, incarnations of sexual desire, fantasies – unreal and not fully human; tantalizingly close but far, far away. My world presents me with women who have been dehumanized. Their stories, their lives, their families, their uniqueness is not part of the equation. They seemingly exist for my benefit, for my titillation, for me to use or discard at the simple click of the mouse.

Is this the fault of those women? After all, if you don’t want to be dehumanized, don’t put yourself in that place, right? No – the fault lies squarely on the shoulders of the ones who drive a culture of dehumanization. And the greatest portion of that guilt falls to men. We are guilty of seeing the other gender in consumeristic terms, rating them on a scale of 1 to 10, ogling some and insulting others. There is no shared humanity in this perspective. There is only what is in it for me.

There will be no gender equality until men view women as fully human. That goes for their mothers, sisters, wives, friends, co-workers – all women they know personally – as well as for the great host of women they will never know personally: the celebrity, the girl walking down the street, the woman on the bus; each and every woman with whom they share this planet. Treating some women with a He For She sense of chivalry and treating others as a commodity will not bring about equality. It is all or none.

I drew the portrait of Emma Watson that is at the top of this article. I was inspired by this young woman taking a very public role in a campaign aimed at gender equality and I wanted to honor that in a way I know how, through art. But a funny thing happened as I worked on her portrait – she became much less a celebrity and much more a human being in my mind; I thought of her family, her parents, her dreams and values, her unique contribution to the world; and the famous veneer disappeared and a real person emerged.

Thinking about women makes them truly human to me. I need to do more of this kind of thinking. Eventually, I hope to be a true He For She, a Feminist in mindset and action if not in name. The humanity we share compels me. The women I know and love compel me. And the women I will never know compel me.