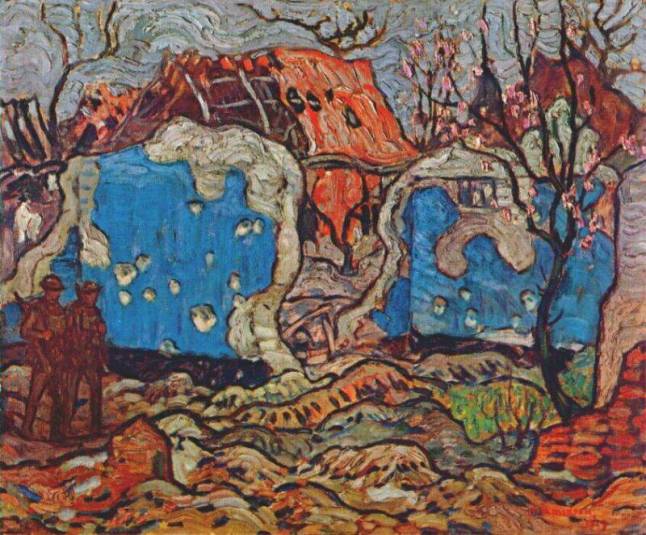 “The rough neck and the out of work far outnumber the patriot. Volunteers by pressure… when you hear all the bosh talked and written about our precious honor, Christian ideals, etc. it just about makes you sick… people who entrust their national honor to men they would not allow to enter their houses in times of peace are not worth fighting for.” – A.Y. Jackson

Today I continue to honor Veterans’ Week here in Canada with paintings by A.Y. Jackson, an artist who enlisted and fought next to other Canadians who fought, bled and died in the mud and muck of the Western Front.

The idea of “War Art” might bring to mind glorified, colorful images of valor, whether real or imagined. Jackson was uncompromising in his display of the truth of war, whether in his images or in his words. He was disgusted by the warmongers on the home front who would never set foot on a battlefield much less deign to be among the poor rabble that made up the bulk of the Canadian fighting force.

His painting Springtime in Picardy is another ironically title piece of truth. We see the familiar war background of shattered homes, hallowed out and made vacant by the human ability to destroy. What was once likely a quaint French village is now a sickly refection of itself. I can’t help but think of the people to whom those walls were the walls of home, of warmth, of laughter and sleep and lovemaking and food and drink, of children playing and gardens growing. In Jackson’s depiction the remains of the houses are almost quivering in pain, as if they are horribly wounded and soon to die.

Yet in the midst of it, the blossoms of the pear tree. At first it is hard to take note of it, but it is there. The promise of spring doesn’t mean peace but it does mean that death doesn’t win.